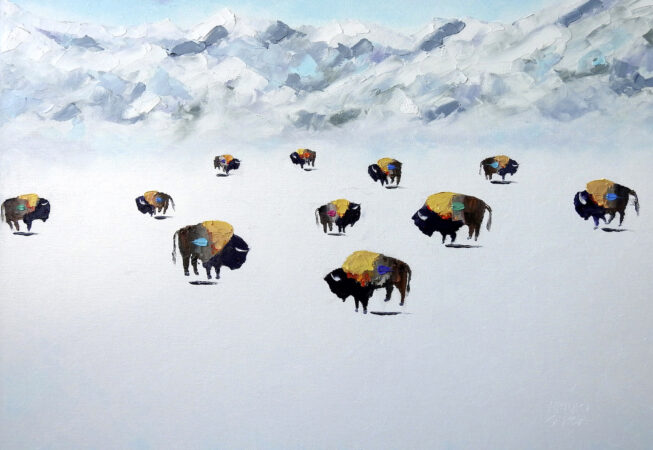 If you like to purchase a print or giclée please go to SHOP. For prices, and other specifics about the original artwork please e-mail artist directly arturogarciafineart@gmail.com

Ever since I was a small and playful kid wearing boots, cowboy hat and a soga, lassoing the cattle and other little cowboys at el Cerrito de San Miguel, in Mexico. I remember being always fond of the animal world. At Christmastime my presents consisted of small plastic toys of animals. I’d get all sorts: Marine, African, American, Farm; I’d even get corrals. I also collected animal stamps from the world, which I’d glue on albums that explained the regions where they lived. That’s where I saw bison for the first time, in a picture stamp; my dad told me it was called “buffalo” and he then talked about the American West and the Indians that inhabited it. I was fascinated by his stories. To me, the American West was an epic never-ending tale of heroic people. Toro Sentado (Sitting Bull), Nube Roja (Red Cloud) were names that stuck in my head. My spirit identified with them. You have to remember I thought of myself as a little cowboy. In those days, 1980, The Lone Ranger Show, which I watched on a black and white tv set we had, was the only window we had to the American West.

The buffalo picture I had, drove me to find out more about its habitat and that is how I was introduced to Yellowstone, which to me, as a kid growing up in Old Mexico, seemed like a faraway land—Yellowstone was the Africa of the Americas in my infantile and perilous mind.

35 years later, art, painting bison, and the American West, took me on a trip to Yellowstone where I have been going on a yearly basis to breathe the purity of the region and to photograph its beauty, bison and other wildlife. Those pictures serve as the foreground from which I make my own painting compositions. Some of the paintings in this collection have also been inspired by great photographers such as Alexis Bonogofsky, Jim Peaco or Cindy Goeddel. Their amazing captures have been a great source of inspiration in my painting compositions.